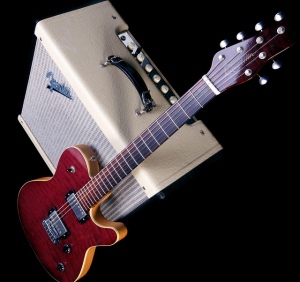 What are the underlying physics behind how many of the greatest lead guitarists in rock have instinctively achieved their signature sounds? Ever wonder how Jimi Hendrix, Eric Clapton, Jimmy Page, Eddie Van Halen and Jorma Kaukonen¹, among many others, so mastered their Strats and Gibsons? First, I suggest checking out Rolling Stone’s list of the 100 Greatest Guitarists for a comprehensive list. In addition to all these virtuosos, for an example I also urge you to a listen to the extended guitar intro Bruce Springsteen played to Prove it All Night during a September 18, 1978 performance at the Capital Theater in New Jersey for a truly astonishing and blistering performance (expertly supported  by E Streeter Roy Bittan’s extraordinary work on the piano).

How do they do it? For the benefit of all of the countless guitar players in the world, how do these masters produce such distinctive guitar sounds? An article entitled The Physics of Playing Lead Guitar was posted on Phys.org on July 23, 2014, described the work of Dr. David Martin Grimes at Oxford University’s Department of Oncology. His regular gig is as a medical researcher. But he is also a guitarist in a band who has been working on understanding the physics of playing lead. He has focused his research here upon the elements of pitch and how they are affected by such factors as the height of the strings above the neck, how strings are “bent” by the musicians, vibrato and whammy bars.

For any musicians as well as others who appreciate the intersection of art and science involved here (but who might only know how to play the radio), I highly recommend a click-through and read of this piece to learn about Dr. Grimes’ unique and, well, sound analytical work.

Many of the rock guitar icons mentioned in the original post above, in addition to many others of equal stature, owe much of their success to the original developer of the solid-body electric guitar, Les Paul. A very admirable summary of his life’s work and accomplishments is clickable here in Wikipedia. He was a pioneering musician, recording innovator, songwriter, string instrument builder (also known as a “luthier”), and inventor. For many decades since he created the first truly electric guitar, the Gibson Guitar Les Paul line of guitars has been revered among musicians around the world and been responsible for some of the greatest music of modern times across a wide array of musical genres.

An incredible artifact from Paul’s life, the original prototype of his electric guitar called “Black Beauty”, is scheduled to be auctioned on February 19, 2015 by Guernsey’s in New York at the Arader Gallery. Here is the page from Guernsey’s website with the description and photos. This upcoming event was covered in a very interesting report in the February 10, 2015 edition of the New York Times entitled Les Paul’s Groundbreaking Guitar Prototype Is Headed for Auction by James Barron. I will sum up some of the key points. I highly recommend clicking through for a full read and to see three additional photos of the Black Beauty.

It is truly an astonishing thing to see in these pictures. Les Paul worked closely with Gibson to get everything just right for this truly revolutionary instrument. There also is a gem of s story in the article about how, Thomas Doyle, the luthier he worked with for many years, ended up purchasing Black Beauty for $1,100 many years ago.

According to Arlan Ettinger in this article, the president of Guerney’s, it could possibly sell for $2 million². Other items including a “mixer” or soundboard that Les Paul used in his own legendary live performances, microphones, recorder and concert set lists will also be available at this auction.

I could easily foresee the bidding becoming very competitive. Although for anyone who has the resources to make a serious bid, my advice is that they should not, well, fret about even going beyond their limits to acquire this cornerstone of modern musical history.

Just to embellish this story a little bit more, eleven years ago, I read a very engaging and offbeat book entitled Poplorica: A Popular History of the Fads, Mavericks Inventions & Lore That Shaped Modern America by Martin J. Smith and Patrick J. Kiger (Harper, 2004). It contained a chapter about how Les Paul invented the electric guitar. I cannot quote this verbatim, but one very clever line in that chapter has always remained in my memory because of its imagery and imagination. The gist of it went something like this: When Les Paul invented the electric guitar in the late 1940’s, he could not possibly have foreseen that one day, decades later, Jimmy Page would be using it to create the sound of a T-Rex being being chain-sawed in half. How true and 100% cool!

1.  For  a wonderful bio and retrospective on Jorma’s remarkable career and extraordinary musicianship, I highly recommend Jorma Kaukonen: Still Working the Roots by Barry Mazor, which was posted on Medium.com on February 8, 2015. From his vast catalog of albums, I urge you to check out Sea Child on Hot Tuna’s Burgers album for his highly unique guitar style and songwriting.

2.  In somewhat of a surprise result, Les Paul’s Black Beauty electric guitar was won at auction for a successful bid of $335,000. This was quite a bit below preliminary estimates of its value. The winning bidder was Jim Irsay, the owner and CEO of the Indianapolis Colts. Here are the complete details in an article in the February 19, 2015 edition of The New York Times entitled Owner of the Colts Pays Six Figures for a Les Paul Six-String by James Baron. My gratitude to the reporter for a great story well told by him.