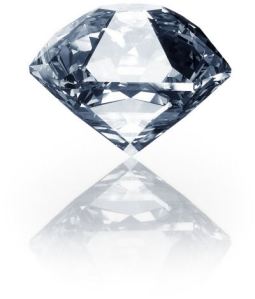 There are eight Bruce Springsteen songs specifically containing the word “diamond” in their lyrics.¹ My favorite among them is from his song Better Days containing the line “Your heart like a diamond shone”. It is a highly evocative image from a deeply powerful song that has a special meaning of hope to many of his fans.

This line quickly sprang to mind when I read a fascinating new article posted on Smithsonian.com on December 2, 2015 entitled Weird New Type of Carbon Is Harder (and Brighter) Than Diamond by Maya Wei-Haas. This is a story about scientists at North Carolina State University² who have just announced the fabrication of Q-Carbon, a substance that is harder and brighter than diamonds as well as having magnetic and glowing properties. I will summarize and annotate it, and pose a few carbon-based questions of my own.

While “Q-carbon” surely sounds far less romantic and is not likely to appear in Bruce’s lyrics anytime soon  – – “Your heart like Q-carbon shone”? – – nah, I just don’t think so – – these four adjectives still seem fitting for both Bruce’s rock and this new material’s roll. For now, let’s focus on the latter in its new diamond setting.

It has taken the North Carolina State University team decades to develop and fabricate Q-carbon. Their invention can make diamonds quickly and at room temperature without using traditional methods of creating industrial diamonds by apply high pressure and high heat to carbon. Moreover, their work also led them to develop this additional “new phase of carbon” called Q-carbon. Their findings were published online on November 30, 2015 in the Journal of Applied Physics in a paper entitled Novel Phase of Carbon, Ferromagnetism, and Conversion into Diamond by Jagdish Narayan and Anagh Bhaumik.

According to Mr. Narayan, the key to this new method’s success is in its speed. At normal room temperature, the team applied “extremely short laser pulses” to amorphous carbon (which has no crystal structure). This heated the material to 6,740°F. When this “puddle” was very rapidly cooled, the Q-carbon then formed.

The scientists found it was harder than regular diamonds, exhibited ferroelectric (magnetic) properties, and was able to give off “small amounts of light”.  Among the anticipated applications for Q-carbon are in developing electronic displays, electronic components, and assisting in “understanding the magnetism of other planets”.

Its most current (no pun intended) use is in improving diamond fabrication. By varying the rates at which the carbon “puddles” are cooled, diamonds can be formed into specialized structure including “nanoneedles, microneedles³, nanodots and films”. Other fields such as medicine and abrasives4 may also benefit from this development.

This new methodology is also relatively inexpensive since its uses an existing  laser system otherwise used in eye surgery. It is likewise very fast as it can produce “a carat in about 15 minutes” according to Mr. Narayan. He is also optimistic that the diamonds can be scaled up from their current size of 70 microns by widening the side of the laser’s beam. (The Smithsonian.com article linked to above contains a photo of these new diamonds.)

The team is now working on further understanding and testing the properties of Q-carbon.

A sampling of additional press coverage on this story from the past week includes:

3.  “Microneedles” were also first mentioned in the same post as Footnote 2 above.

4.  Does this include car alarms that only seem to go off at 4:00 am in the morning in my neighborhood?