New York is an incredibly vast and complex city in a multitude of ways which, despite its extensive mass transit system, also makes it a great place to walk around. Many New Yorkers prefer to travel to their destinations by foot purely for the pleasure of it. I am proudly one among them.

Whether it is on the streets of NYC or anywhere else across the world, bipedal locomotion is a healthy, no cost and deeply sensory experience as you take in all of the sights and sounds along your route. It also gives you the opportunity to think to yourself. Whether it is pondering the particulars of “When am I going to get the laundry done?” up to and including “E=MC²”, plus a gazillion other possible thoughts and subjects in between, putting one foot in front of another and then starting off of your way will transport you to all kinds of intriguing places inside and outside of your head.

Researchers in US universities have recently found compelling evidence that walking can also be quite conducive to creativity. This was the subject of a most interesting article on Quartz.com posted on April 10, 2016, entitled Research Backs Up the Instinct That Walking Improves Creativity, by Olivia Goldhill. I highly recommend reading this in its entirety. I will summarize and add some additional context to this, and then pose some of my own pedestrian questions. 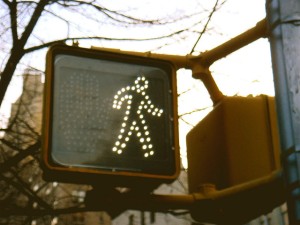 In an earlier article posted on the Stanford University News website on April 24, 2014, entitled Stanford Study Finds Walking Improves Creativity, by May Wong, researchers reported improvements in their test subjects’ Guilford’s alternate uses (GAU) test of creative divergent thinking and their compound remote associates (CRA) test of convergent thinking, conducted during and immediately after walking. The report itself is called Give Your Ideas Some Legs: The Positive Effect of Walking on Creative Thinking, by Marily Oppezzo, Ph.D. and Daniel L. Schwartz, Ph.D.. I also recommend reading both of these publications in their entirety (but please walk, don’t run, while doing so).

The effects seen upon the test subjects’ levels of creativity were nearly equivalent whether they were walking outside or else on a treadmill inside while facing a wall. It was the act of walking itself rather than the surroundings that was responsible.

Dr. Schwartz said that the “physiological changes” related to walking are “very complicated”. The reason why walking benefits “so many thinkers” is not readily apparent. However, he thinks “that the brain is focusing on doing a task it’s quite good at”. As a result, walking relaxes people and enables them to think freely.

While it is scientifically well-known that exercise can improve an individual’s mood, the underlying reason remains unclear whether, in its “more intense forms”, exercise has the same effect when compared to walking. (For the full details on this, the article links to a report entitled The Exercise Effect, by Kirsten Weir, which was the cover story in the December 2011 edition of the Monitor of Psychology, Vol. 42, No. 11.)

Barbara Oakley, is an engineering professor at Oakland University and the author of A Mind for Numbers: How to Excel at Math and Science (Even If You Flunked Algebra), (TarcherPerigee, 2014), about effective learning. Her text includes the beneficial effects of walking. In an interview, she took the position that it is incorrect to assume that people are only learning when they are “focused”. Rather, she believes that walking enables us to “subconsciously process and think in a different way”. This has helped her in her own work when she has become “stuck”. After she takes a walk for 15 minutes, she finds that her ideas begin to flow again.

Some therapists have also recently tried to use the benefits of walking outdoors while conducting sessions with their clients. For example, Clay Cockrell, a therapist in New York, believes that this activity permits “more free form thinking”. He sees 35 to 40 clients each week using this approach and has found them grateful for the opportunity to do so.

Mr. Cockrell believes that New Yorkers mostly travel from destination to destination and, as he says are “never just outside out and about”.

[I respectfully disagree on that last point as I stated in my opening.]