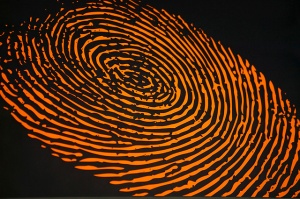 Among the recent advancements of the replication of various human senses, particularly for prosthetics and robotics, scientists have just made another interesting achievement in creating, of all things, artificial fingerprints. They can actually sense certain real world stimuli. This development could have some potentially very productive – – and conductive – – applications.

Could someone please cue up The Human Touch by Bruce Springsteen for this?

This latest digital and all-digit story was reported in a fascinating story posted on Sciencemag.org on October 30, 2015 entitled New Artificial Fingerprints Feel Texture, Hear Sound by Hanae Armitage. I will summarize and annotate it, and then add some of my own non-artificial questions.

An electronic material has been created at the University of Illinois, Urbana-Champaign, that, while still under development in the lab “mimics the swirling design” of fingerprints. It can detect pressure, temperature and sound. The researchers who devised this believe it could be helpful in artificial limbs and perhaps even enhancing our own organic senses.

Dr. John Rogers, a member of the development team, finds this new material is an addition to the “sensor types that can be integrated with the skin”.

Scientists have been working for years on these materials called electronic skins (e-skins). Some of them can imitate the senses of human skin that can monitor pulse and temperature. (See also the October 18, 2015 Subway Fold post entitled Printable, Temporary Tattoo-like Medical Sensors are Under Development.) Dr. Hyunhyub Ko, a chemical engineer at Ulsan National Institute of Science and Technology in South Korea and another member of the artificial fingerprints development team noted that there are further scientific challenges “in replicating fingertips” with their ability to sense very small differences in textures.

In the team’s work, Dr. Ko and the others began with “a thin, flexible material” textured with features much like human fingerprints. Next, they used this to create a “microstructured ferroelectric skin“. This contains small embedded structures called “microdomes” (as shown in an illustration accompanying the AAAS.org article), that enable the following e-skin’s sensory perceptions*:

Dr. Ko said his next challenge is how to transmit all of these sensations to the human brain. This has been done elsewhere using optogenetics (the use of light to control neurons that have been genetically modified) in e-skins, but he plans to research other technologies for this. Specifically, in the increasing scientific interest and development in skin-mounted sensors (such as those described in the October 18, 2015 Subway Fold post linked above), this involves a smart groups of “ideas and materials” to engineer these.

For an absolutely magnificent literary exploration of the human senses, I recommend A Natural History of the Senses by Diane Ackerman (Vintage, 1991) in the highest possible terms. It is a gem in both its sparking prose and engaging subject.

*  See this Wikipedia page for detailed information and online resources about the field known as haptic technology.