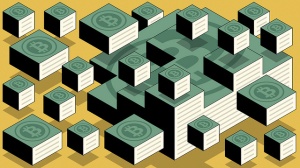 The market quote for Bitcoin on October 15, 2015 at 5:00 pm EST was $255.64 US according to CoinDesk.com on the site’s Price & Data page. At that same moment, I was very fortunate to have been attending a presentation entitled the Bitcoin Seminar that was just starting at the law firm of Kaye Scholer in midtown Manhattan. Coincidentally, the firm’s address is numerically just 5.64, well, whatevers¹ away at 250 West 55th Street.

Many thanks to Kaye Scholer and the members of the expert panel for putting together this outstanding presentation. My appreciation and admiration as well for the informative content and smart formatting in the accompanying booklet they provided to the audience.

Based upon the depth and dimensions of all that was learned from the speakers, everyone attending gained a great deal of knowledge and insight on the Bitcoin phenomenon. The speakers clearly and concisely surveyed its essential technologies, operations, markets, regulations and trends.

This was the first of a two-part program the firm is hosting. The second half, covering the blockchain, is scheduled on Thursday, November 5, 2015.

The following are my notes from this 90-minute session:

1.  What is a “Virtual Currency” and the Infrastructure Supporting It?

1.   Is there a conversion formula, equivalency or terminology for the transposition of address numerals into Bitcoin? If one soon emerges, it will add a whole new meaning to the notion of “street value”.

2.  See also this May 8, 2015 Subway Fold post entitled Book Review of “The Age of Cryptocurrency”.