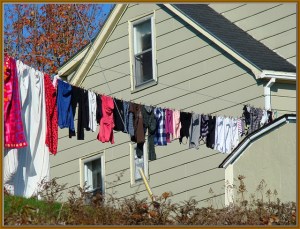 It is likely – – or if it isn’t, it should be – – a universal truth that everyone loves clean clothes but no one likes doing the laundry. I have arrived at this conclusion through many years of my own thoroughly unscientific observations in the laundry room in my apartment building. (My other research project is focused upon discovering the origin of the rift in the time and space continuum where stray socks always seem to disappear into in the washers and dryers.)

This ages old situation might be about to change based upon an interesting new development. This story is neither made from whole cloth nor a fabric-ation.

A group of scientists in Australia claim to have discovered a means to keep clothes clean by treating them with nano-size particles of two common metals and then exposing the fabric to sunlight. This could perhaps one day mean an end to washing clothes in the traditional soap and water manner. This research was reported in an article in the April 25, 2016 edition of The Wall Street Journal entitled An End to Laundry? The Promise of Self-Cleaning Fabric, by Rachel Pannett. I will summarize and annotate this story, and then pose several of my own questions about this, well, material.

Rajesh Ramanathan, a postdoctoral fellow at RMIT University in Melbourne, Australia, explained the basic principal being tested: Minute flecks of copper and silver (called nanostructures), are embedded into cotton fabrics that, when exposed to sunlight, generate small amounts of energy “that degrade organic matter ” on the cloth in about six minutes. He and his team are conducting their work at the Ian Potter NanoBioSensing Facility, within RMIT.

Dr. Ramanathan characterized the team’s work as being in its early stages and involving “nano-enhanced fabrics” with the “ability to clean themselves”.  The silver and copper do not alter the fabric in any way and remain embedded even when rinsed in water. As a result, their self-cleaning abilities will persist in successive multiple cleanings.

While encouraging no one to get rid of their washing machines just yet, he does believe that his team’s work “lays a strong foundation” for additional advancements in creating “fully self-cleaning textiles”.

Other current research is investigating whether such nano-enhanced fabrics are capable of affecting germs and even whether they can eradicate “superbugs” that resist today’s antibacterials.

To date, the research team has been testing their fabrics with organic dyes and artificial light. Next they are planning experiments with “real world stains” such as ketsup and wine in an effort to measure how long it will take them to “degrade in natural sunlight”. Additional planed testing will be to see how the nanostructures affect odors in the fabrics.

However, another scientist named Christopher Sumby, an associate professor in chemistry and physics at the University of Adelaide, expressed his reluctance at talking about self-cleaning fabrics “at this stage”.

Nonetheless, this experimental new process that use silver and copper, are two “commonly used” chemical catalysts and are “relatively cheap”. Two of the challenges currently facing the research team are how to scale up production of these nanostructures and “how to permanently attach them to textiles”. They are using cotton in their work because it has “a natural three-dimensional structure” that enables the nanostructures to embed themselves and absorb light. They have also found that this works well in removing organic stains from polyester and nylon.

Dr. Ramanathan said that a variety of industries, including textile manufacturers, have expressed their interest to his team. He believes that to enable them to commercialize their process, they would need to make sure the nanostructures can “comply with industry standards for clothing and textiles”.