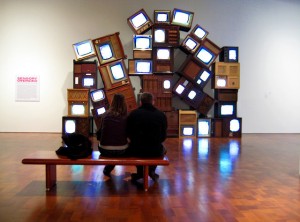 Nielsen is a long-established and industry leading firm in measuring, analyzing and reporting upon media deployment, usage and audiences. Their services also include a similar range of sophisticated services concerning consumer behavior and products.

A fascinating new report appeared on their sites Newswire section on June 2, 2014 entitled This TV Season’s Biggest Moments on Twitter that chronologically mapped which US TV shows from September 2013 through May 2014 generated the greatest volume of traffics and postings on Twitter. The categories included:

Each of these data points is clearly explained and includes the names of the shows, their corresponding data generated by these massive amounts of Twitter activity, and the hashtags and handles involved. In a single screen, this data visualization is a terrific example of how to present so much information that is belied by its elegant and informative design.

Moreover, the value of this data must be highly significant in a multitude of ways to, among others, advertisers, entertainment companies, media planners and producers, content strategists and marketers, and demographers in assessing their respective audiences and clients.

For me, the best story told on TV during the 2014 season was – – in a fictional world where “brains” take on an entirely different significance – –  The Walking Dead on AMC in terms of the extraordinary number of tweets about ongoing adventures Sheriff Ricky and the Grimes Gang. This was covered on Nielsen.com on December 15, 2014 in a post entitled Tops of 2014: Social TV.  TWD averaged twice as many tweets as its next competitor in the ongoing series category. As I read scores of TWD tweets on the mid-season finale myself, everyone will miss you, Beth.

We are now experiencing the emergence of what is being called Social TV, a phenomenon where Twitter and other social media traffic and sentiment data and metrics are exerting significant influences upon on-air advertising campaigns, audience perceptions and creative choices. Just to cite another example of this is the contemporaneous two-screen experience audiences can now join on shows such as The Walking Dead.

Scientific support for the relevancy, accuracy and scalability of Twitter data and metrics on individual TV shows continues to grow. Persuasive new evidence was released on March 9, 2015, in a report authored by Nielsen entitled Social TV: A Bellwether for TV Audience Engagement. An informative article on this report was also published in yesterday’s edition of The New York Times entitled Social Study of TV Viewers Backs Twitter’s Claims to Be Barometer of Public Mood by Vindu Goel. I will sum up, annotate and comment on this article and supplement this with a look at the Nielsen report itself. I very highly recommend clicking through and reading both of them in their entirety.

Nielsen used 300 people in a study of their brain activity while they watched eight selected shows in an effort to find the level of correlation to their volume of tweets about the same content. The results showed a significantly close correlation. The Nielsen report contains a concise graph of the data that  visually  charts this point at 79.5%.*

As a result, researchers can now accurately assess the level of a particular show’s “depth of engagement” of its audience with the events as they unfolds on the small screen. Moreover, this is not only for the show itself, but on a more granular level on a scene-by-scene basis. Thus, this study and report reaffirms Twitter’s assertions that its data accurately represents its platform’s real-time engagement of its users in real-time during a show’s broadcast, as well as a show’s “popularity”.

Most importantly, this data and its interpretations can be used to sell ads to advertisers looking to best maximize their expenditures in their efforts to most effectively reach the audiences they are seeking for their  services and products.

Twitter data and metrics can also be used for predicting potential audiences for new shows even before they premiere, according to a report Nielsen released on January 15, 2015 entitled Must See TV: How Twitter Activity Ahead of Fall Season Premieres Could Indicate Success.

Nonetheless, neither Nielsen nor Twitter have addressed the key issue of the degree to which the volume of Twitter traffic actually increase the size of the viewing audience.

Nielson is planning another study to evaluate the impact of Twitter activity concerning TV ads upon the audiences who view them. (Might I suggest starting with this current TV ad about Mountain Dew Kickstart that has been viewed nearly 6.5 million times on YouTube and makes me laugh out loud every time I see it!)

*   Issues concerning the distinctions between correlation and causation were raised in two recent Subway Fold posts on November 27, 2014 entitled Minting New Big Data Types and Analytics for Investors and then on January 27, 2015 in a post entitled Studies Link Social Media Data with Personality and Health Indicators.